Posted by Linda McQuinn Carlblom
I know what you're thinking. Aren't we supposed to raise compliant teens? Don't we want them to be obedient and easy to get along with rather than resistant? Well, yes. And no. Compliant and resistant (rebellious?) teens both need nurturing.

As a plant needs to push through the hard dirt in order to stand strong and healthy in the wind, so our teens need to push against us to be strong and independent in the world. Same goes for other species in creation like a bird pecking its way out of its shell or a butterfly fighting its way out of the cocoon. If you try to help by breaking the shell for them or peeling back the cocoon, the animal dies because it didn't gain the strength needed by working its way out on its own.

Teens are no different. They push us with their know-it-all attitudes, their eye rolling, and sometimes outright rebellion as they try to find strength to stand on their own. As parents, it's not easy being the hard dirt. It hurts when our shells are cracked by their cutting words and missed curfews. But it is a necessary part of their growth. They need our loving support firmly pressing the dirt around their weak little stalks, reinforcing the tender roots that are forming in places we can't even see. Still, I don't know a single parent who didn't feel helpless and uneasy, if not downright disheartened, as their teen emerged from their warm cocoon. Knowing that doesn't make it any more pleasant. Nor does it mean your teen shouldn't be corrected. But even as you discipline them, remember they are doing what is necessary and completely natural. It's part of the unspoken plan, the mystery of God and nature.

When I was a teen I hated myself at times because of the way I treated my parents. But I couldn't seem to stop it either. In hindsight, I think it's almost like a force of nature, a silent call to independence, the pulling away that must happen for teens to move into adulthood. They may not understand or like their actions any more than you do. That's okay. But as a parent, it calls for tremendous amounts of grace.

Grace. Understanding. Forgiveness. Prayer. Generous doses of laughter. These are all essential ingredients parents need as they journey through the teen years. Never forget your child's struggle and how they count on you to be a constant stabilizing force in their life. Eventually, they'll be mature enough to appreciate all you've done for them. And that warm, loving person you raised will re-emerge, mature and capable.

What is the hardest thing for you about being the parent of a teen? How do you cope?

Posted by Linda McQuinn Carlblom
I love celebrating Christmas. Any story with a baby always captures my attention, but a baby, conceived supernaturally, born to save the world? Just hearing the first few words from Luke, chapter two stirs my soul. "In those days Caesar Augustus issued a decree that a census should be taken of the entire Roman world. (This was the first census that took place while Quirinius was governor of Syria.) And everyone went to their own town to register" (NIV). I know what's coming--Who's coming! God's only Son, heavenly hosts, lowly shepherds, a young mother wrapping her newborn in swaddling clothes and laying Him in a manger, peace, goodwill toward men. I love the story. It is the beginning of my salvation. That said, I don't love all the work that goes into Christmas, either to make the holiday happen or to put it away. Don't get me wrong. I enjoy the decorations and music, the red and the green. But I dislike putting up the tree and the lights and taking them down again just a few short weeks later. It's like a writer saying they don't like writing, but they love to "have written." The same is true for me at Christmas. I love the result, but not the work it takes to get there.

This year I was blessed to have my two oldest grandsons, ages twelve and ten, come help put up the outside lights with Grandpa and then return to take them and the Christmas tree down. It was a gift they didn't even know they'd given. I was elated not to have to deal with that tree. Sure, there were other parts of the house I had to un-decorate, but at least that big part was done. It made the rest seem so much more manageable. 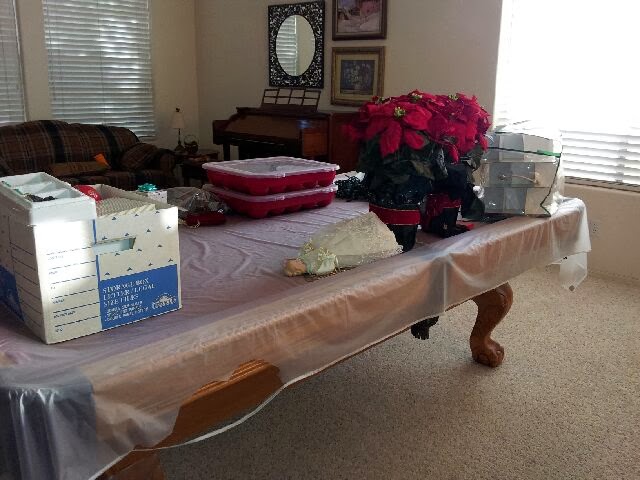 But guess what? The boxes of decorations, lights, and wreaths that we took down are still sitting in my entryway waiting to be stashed into the closet for another year. They've been there for four days now. I hate looking at them. But do I move them? No. Why? Because I hate putting Christmas away! I'm ready to be done with it and move on into the New Year, operating on a routine schedule, but those boxes are still sitting. And so am I.

So, today I am making myself a promise. Those boxes of decorations will be out of my entryway by tomorrow. After all, putting away Christmas in no way means I'm putting away Jesus. He'll still be the radiant centerpiece of my life, burning brighter than any Christmas candle. But I'll feel more organized and ready to tackle the New Year with those boxes securely packed away. My heart will be able to sing, "Oh come let us adore Him" with fresh fervor when my house is less chaotic.

Sing with me, "Joy to the world, the boxes are gone!"

Anyone else feel like this? Or are you one who would love to keep Christmas up all year long? Chime in in the comments.