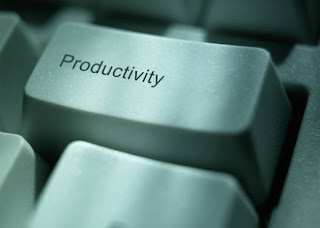 I remember when my daughter was a toddler and I was going to a five-day writers conference in another state. My sweet husband took a week of vacation from work to be home with her and our two school-aged children. He looked forward to it and even made a list of projects he would work on during his week off. We talked on the phone every day I was gone and toward the end of the week, I asked him how his projects were coming. I could almost see him throw his hands up in exasperation. "I can't get anything done! Here I had a whole week off and I haven't been able to finish one project!" I totally understood. Caring for a home and children leaves little time for anything else.

Being a mom is tough work that often leaves you feeling unproductive. Sometimes it's all you can do to put one foot in front of the other. My oldest daughter, Jessica, is a stay-at-home mother of six children, aged three months to twelve years. She has little time to feel productive at anything other than taking care of the children and meeting their needs. She also home schools her three school-aged kids. Remarkably, she is happy, content, and peaceful in all the activity that constantly swirls around her.

I recently overheard a mom of three asking my daughter for her phone number. This mom said she often felt like she never accomplished anything in a day. She sounded a bit defeated and frustrated. "How do you do it? I never get anything done!" She needed someone to talk to at times when she felt overwhelmed.

Jessica's response surprised me. She smiled compassionately, then said,."I don't get anything done either. But one day I asked Kevin a question that changed my perspective. I asked him, ‘If I could do only one thing every day that would make you happy, what would it be?’” His answer? "I'd like it if you could get dressed every day." Her face lit up just reliving that moment. She looked that frustrated mom right in the eye, smiled brightly, and said, "I could do that!"

So every day, she gets dressed. She was quick to point out that it may not be until fifteen minutes before her husband gets home from work, but he sees her in real clothes every day. If she accomplishes that, then she has been productive. It gave her a whole new perspective. Doing that one little task makes her feel victorious instead of like a failure. She doesn't have to worry that she's disappointing Kevin, because she did the one thing that matters most to him.

If you feel unproductive as a mom, ask your man what one thing you could do every day that would make him happy. You may be surprised at what he considers important. And it may take a load of stress off your shoulders. Post the answers you get to that important question in the comments below. It will be interesting to see what matters most to our husbands.


In the meantime, keep on keeping on. You're doing the most important job in the world. Your house may be a mess and you may feel like a walking zombie at times, but what you do matters. When you're loving and caring for your kids, you're doing the most productive thing in this season of your life. Don't sell yourself short. Your productivity will be evident when your children grow into happy, responsible adults. And it will be worth every sacrifice and unproductive feeling you have today.